What is a Double VPN? 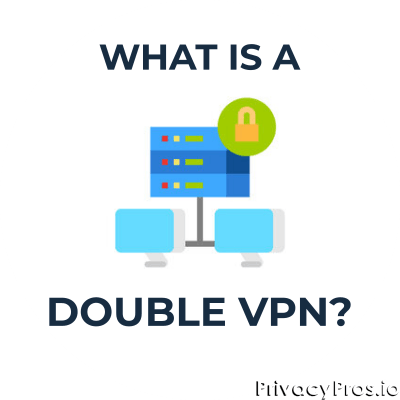 Plus more... Read on to learn everything you need to know about double VPN.

Also known as Multihop VPNs or VPN cascading, a double VPN is when a user connects to one server in a VPN and then that server connects to another VPN server.

After the connection is finished hopping between different servers, you connect to your intended destination.

This is done to increase privacy while browsing on the internet.

How Does it Work?

The basic setup of a double VPN is not much more complicated than a standard VPN setup.

Let’s say you are in Sweden.

Using your VPN, you will connect to a server in the Netherlands that will change your IP address and encrypt your browsing.

The server will change your IP address again and encrypt your browisng a second time.

Finally, you will exit back out onto the internet with double encryption and two layers of IP address changes.

Why Add an Extra VPN?

One reason to hide your online activity behind two VPNs is the same reason you hide it behind one. You want to encrypt your browsing activity so that your ISP does not sell your data to third parties. With a double VPN you get encryption on top of your encryption.

ISP Will Not Know Your Destination

If someone is monitoring your home network, a single VPN may not be enough. The spy can see the connection to the VPN and then follow that connection. But, if you have a double VPN, the spy can only see your first connection. They won’t know the IP address of your destination.

TCP is a connection-oriented protocol. When you use TCP to connect to another client on a network, you send a piece of data and waits for a response. If you receive no response back, you send the packet again. If you do receive a response, you send the next packet. In this way, TCP checks for error and guarantees delivery of your communication.

UDP is much faster than TCP is many cases. That is because TCP connections have lots of extra tasks to do. TCP connections are more reliable because of these extra tasks. They guarantee that files are received in the order they are sent. Either way, using both transfer protocols increases privacy and speed

Who Should Use a Double VPN?

If you are journalist, you may often report on stories your government won’t like. You may need to hide your browsing behavior to protect yourself or your sources.

Adding a second server means that even if your government knows you are using a VPN, they won’t be able to see your final destination.

Activists also need added protection from law enforcement. In some countries, it is illegal to protest your government. Effective demonstrations often require careful planning among large numbers of people.

Many activists find that planning their protests is dangerous. They may be commiting a crime by doing so.

So they cannot afford for their identity to be exposed. By adding an extra server to their connection, activists decrease the chance of doxxing themselves.

Perhaps you have no interest in protesting. Maybe your country just has restrictions on what content you are allowed to look at. Then a double VPN is for you.

For example, let’s say you live in China. China restricts many sites from the US. If you want to access one of these US sites, you’ll need to connect to a different country first. You could connect to a VPN server in Dubai.

China will think you are trying to access a site in the middle east. Then your VPN can proceed to connect to a US site.All the US site will know is that there is traffic coming from the middle east.

Some of us don’t want anyone to know what our browsing behavior is.

We value privacy for the sake of privacy. In that case, a double VPN is also for you. Your ISP monitors your activity and sells your data to addvertise to you. That is annoying.

Nord VPN offers a fantastic option for doubling up your encryption. Nord is one of the most trusted companies in the VPN space.

Surfshark also offers a fantastic option for double VPN which it calls “multihop”. Surfshark has moved up the ranks of the most reliabel VPNs in the industry.

It routes all traffic through a secure server in Switzerland first, then to another server of your choice. It’s email service is very trusted as is its VPN service.

How to Set Up Double VPN in NordVPN

Pick which suits you best and hit ‘connect’.

How to Set Up Double VPN in SurfShark

In the main menu, select ‘Multihop’ and choose one of the server pairs below.

How to Set Up Double VPN in Proton

In the main menu, select the ‘Secure Core’ toggle.

Then select a drop down next to the country you want to connect to and select “connect”.