Why the Billfodl Only Holds 4 Letters of Each Word 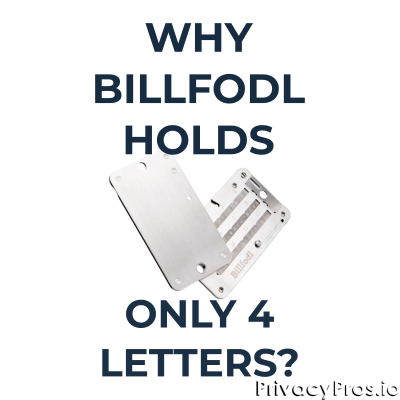 Plus more... Read on to learn everything you need to know about the reasons why the Billfodl only holds 4 letters of each word.

You’ve just received your Billfodl in the mail, and as you set it up you realize that each slot only holds 4 letters. “OH NO!” you think. “This Billfodl is broken! It doesn’t hold my entire seed phrase?

Don’t worry. There is nothing wrong with your Billfodl.

There is a very good reason the Billfodl only holds 4 letters of each word, and we will explain why below.

The Billfodl is a stainless steel device designed to store your recovery phrase.

For example, the keepkey hardware wallet only uses 12 words. The ledger series of wallets uses 24. Some software wallets sit in the middle with 18 backups words.

You may have noticed that some of these words are up to eight characters long. Why then does the Billfodl only let you backup four letters?

Because you only need the first four letters. Looking at the BIP39 word list will make it easier to understand.

Lets take a look at words #2016: winner and #2017: winter. They share the same first three letters ‘win’. But the fourth letter is different.

What Will Happen if You Need to Recover a Crypto Wallet?

When you create a new wallet, you will choose the recover option - most wallets have this feature.

It will ask you to input your recovery phrase.

As you enter the first word, letter by letter, you will discover that the wallet will start autofilling the rest of the word for you. For instance, if your first word is “type”, you will input a “t” and an “y”. At this point, the wallet will likely show you “type” and “typical” and let you pick one.

You won’t have to keep choosing letters. The wallet is trying to make recovery easier for you.

Let’s take “ugly” as an example again. As soon as you input the letter “u”, it will probably force you to choose “ugly” since that is the only word that starts with a “u” in the BIP39 List.

Because of this feature of BIP39, backing up more than the first four letters is unnecessary.

Why Not Backup The Remaining Letters Anyway?

There are Four reasons we do not back up the remaing words.

Backing up more letters than necessary means we would need to provide more tiles. We would also need to make the Billfodl larger.

Doing this would require more labor and more raw materials. And the increased materials would make it heavier and cost more to ship. By not adding unnecessary labor and weight, we save you money.

Small contraptions like the Billfodl tend to hold up better in extreme elements, such as heat. We want the Billfodl to protect your recovery phrase in as many of these conditions as possible. The smaller we can make it the better.

More tiles means a longer set up process. The truth is, setting up a backup is not fun. Its tedious, no matter how you slice it. We’d prefer not to make you spend any more time on it than is necessary. Especially when there is no increased benefit to doing so.

If you have any other questions about why you only need four letters for a Billfodl or are curious about something else, send us an email to support@privacypros.io. We would be happy to help!