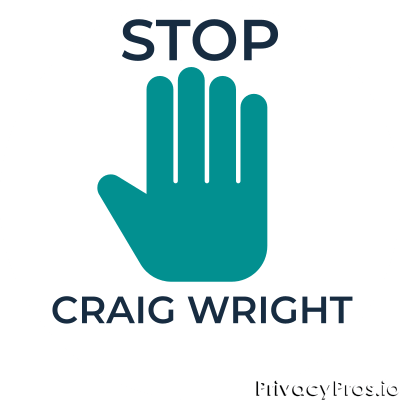 Plus more... Read on to learn everything you need to know about Craig Wright.

The links and information listed here are things Craig Wright has said or written in an attempt to convince people he is Satoshi Nakamoto, the creator of Bitcoin. I pulled a list of forgeries, fakes, plagiarism and lies and copied and pasted from Bitcoinfiles.org

Note: This page was originally mirrored from Cult of Craig - Github, now defunct.

A New, Safer Home for StopCraigWright.com

If you are looking for Stopcraigwright.com, you have come to the right place.

However, we have taken custody of the site from him for the good of the community and have relocated all of its content, word-for-word, here on Privacy Pros.

Please enjoy and get informed - Faketoshi must be stopped!

This anthology was built by the Autonomous A.I. that Craig S. Wright did not work on, and was created to provide an index for all of the claims made by Craig S. Wright. All information has been provided voluntarily by members of the Bitcoin community. You are free to draw your own conclusions.

CSW is a fraud telling desperate LargeBlockers what they want to hear, veering into Econ for the purpose of desperate obfuscation.

In Relation to Satoshi

On April 12th, 2019 Craig S. Wright wrote a Medium article where he claimed to have paid for the Bitcoin.org domain with a credit card with an attached screenshot of the receipt.

In that article, Craig wrote, “This is the source of Vistomail and the registration of the domain bitcoin.org.” He then shows this screenshot.

Unfortunately for Craig, It was quickly discovered that anyone could purchase these services on existing domains.

Craig S. Wright claims to have sent an email to Dave Kleiman on 12, March 2008. He claims to have used an email from a domain that was not registered until January 23, 2009.

Satoshi Nakamoto announces the v0.1 release of Bitcoin six days after the genesis block is mined.

Craig S. Wright creates a document dated January 10, 2009 stating the Bitcoin beta will go live January 11, 2009. That is 8 days after the genesis block was mined, in case you are as bad at math as Craig S. Wright.

This one is important. It is Craig S. Wright being caught lying about his Bitcoin wallets.

Who is Craig Wright?

Craig Wright is an Australian computer scientist and businessman who claims to be Satoshi Nakamoto, the inventor of Bitcoin.

Is Craig Wright the real Satoshi?

According to his sayings, yes he is. According to much of the media and the cryptocurrency community, no he is not, and this is backed by all kind of proofs.

Does Satoshi Nakamoto own Bitcoin?

Satoshi Nakamoto, the creator of Bitcoin, mined 1.1 million Bitcoin, in the first seven months of Bitcoin’s existence. This amount of Bitcoin worths about $10 billion, but it’s untouched to this day.

What is Bitcoin whitepaper?

What is Blockchain technology?

‘Blockchain’ comes from the ‘blocks’, which are individual records, that are linked in a single list, called ‘chain’. So, blockchain is digital record of transactions with cryptocurrencies.