Trezor One and Model T Supported Coins and Cryptocurrencies 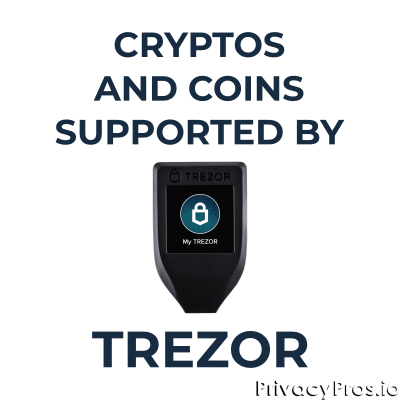 Plus more... Read on to learn everything you need to know about what cryptocurrencies and coins Trezor One and Model T support.

Trezor was created by Satoshi Labs in 2012.

The company is responsible for several well-known Bitcoin projects including Slush Pool (a Bitcoin mining pool), CoinMap (map of establishments that accept Bitcoin) and, of course, Trezor.

Trezor offers support to an array of coins from a multitude of different standards and protocols, including ERC20, Bitcoin, and others.

Because it natively supports all ERC20 tokens, there is no need for integration of MyEtherWallet or MyCryptoWallet into Trezor wallet.

Even though this feature may sound insignificant to some, adds even more security than other hardware wallets can and prevents the hassle of using a third party integration to secure your tokens.

As a bit of background: ERC20 tokens are cryptocurrencies made on the Ethereum protocol.

To be ERC20 compliant, you have to follow the ERC20 protocol standards.

Other Coins Support by Trezor Devices

Besides the ERC20 tokens, Trezor offers support to all major cryptocurrencies, including:

Even though offering support to more than one cryptocurrency grants companies the right to call their wallets “multi-currency”, Trezor shows the true meaning of the word.

No matter what Trezor device an investor is using, Trezor offers support to over 1000 cryptocurrencies.

Trezor One device does not support:

On the other hand, Trezor Model Tdoes not support:

Don’t compare Trezor to any software wallet on your smartphone; the differences between the two are enormous.

Hardware wallets are the safest and most secure forms of storage possible, while also being easy to use. Trezor has earned its place in the top of the hardware wallet industry.

There is no denying that every cryptocurrency investor should have a hardware wallet in order to protect their investments the best they can. The devices offered by Satoshi Labs and Trezor have some amazing features at affordable prices.

With that being said, every choice comes down to personal preference, which will ultimately decide which device they will pick.

If you already own a Trezor, maybe you want to take your security up a notch! Learn how to set up Passphrase protection on your Trezor here!