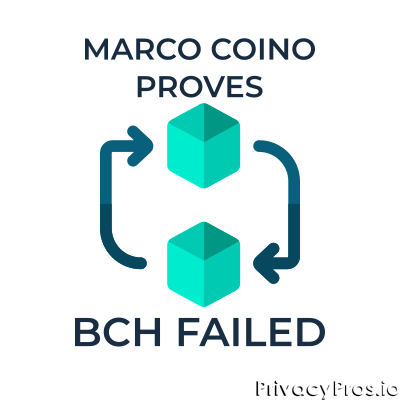 Plus more... Read on to learn everything you need to know about how Marco Coino proves BCH has failed.

Back in the early days of Bitcoin, there were only a few smart people who identified the potential in the currency. However, as the currency has grown in popularity and more people hold bitcoins, it has started a movement to decentralize currency.

With just one problem.

Info: In an attempt to mitigate the issues of time-lags and extensive delays, in 2017, Bitcoin Cash (or BCH) arrived. Using the same codebase but a much larger Blocksize limit, BCH could process around two million transactions a day.

It was, in many ways, the next evolution of bitcoin as a global currency.

Bitcoin Cash merchant directories such as Marco Coino popped up, to let users know where they could spend their Bitcoin Cash.

Collecting user-generated information, Marco Coino shows where you can trade in BCH, and for a while, looked like a promising endeavor.

Proponents of BCH hailed this as the inevitable rise and success of BCH around the world.

Where did it all go so wrong?

In the beginning, it seemed like Marco Coino could help the widespread acceptance of BCH as an international currency.

The Bitcoin Cash merchant directory seemed ready and willing to be a central hub for data sharing, and the numbers looked promising.

However, behind the scenes, all was not going well.

Users reported waiting over three months to see their businesses approved - if they were at all. And while BCH was taking off in Japan and North Queensland, other parts of the world were falling far behind.

In Europe, Slovenia has the highest number of BCH accepting properties with over 500 - but in the rest of mainland Europe, there aren’t even 100 vendors.

Failing the Need for Speed

Updates to the app take many days, and when completed, they are often misconfigured or drop vital information.

The enthusiasm shown by businesses wanes when after months, they still don’t see themselves featured in the directory.

When BCH was introduced as a speedier alternative to Bitcoin, Marco Coino cannot live up to the BCH early promise.

Info: If reliability and accessibility are an active struggle, and a business cannot put its faith in Marco Coino, then with BCH no longer seems like a sound investment of time or resources.

Outside of BCH evangelists, people are unlikely to spend the time and effort to support the currency.

Even more troubling than the delays are the potential security and safety issues associated with Marco Coino.

One user has reported receiving an early-morning phone call from somebody trying to confirm their listing from somebody cursing and issuing bizarre threats.

While this might not be an everyday occurrence, that it happened even once is enough to challenge the legitimacy of BCH.

Warning: The unvetted nature of adding merchants (that is, anybody can do it without proof) means that businesses could quite easily be listed that don’t and never have been open for BCH.

For BCH to prove a viable alternative to other currencies, it needs to be accessible, reliable, and secure. On all three counts, Marco Coino has failed.

With the best will in the world, and with all of the benefits that Marco Coino had as an early Bitcoin Cash merchant directory, there still seems to be a disconnect between BCH enthusiasts and the rest of the world. And Marco Coino highlights every single problem.

For BCH to be taken seriously alongside other forms of transactions, it needs to go much further in proving its legitimacy.

Info: A drastic overhaul of Marco Coino is needed, and a serious examination of the time and resources spent making a directory that isn’t currently fit for purpose.

Every delay, every security risk, and every illegitimate business on the platform does massive damage to the credibility of BCH as a whole.

Fundamentally, and perhaps a little like BCH itself, Marco Coino tried to run before they could walk. Without the systems and processes in place, there was no practical way for the Bitcoin Cash merchant directory to scale.

Launching an international operation without the framework to support is - and has - caused massive and lasting damage to the reputation of Bitcoin Cash.

Marco Coino is a Bitcoin Cash merchant directory and it shows where you can trade in BCH.

What does BCH means?

BCH stands for Bitcoin Cash, which is an altcoin version of the most popular cryptocurrency, Bitcoin.

Is Marco Coino used in Europe?

Yes, it is. Slovenia has the highest number of BCH accepting properties with over 500 - but in the rest of mainland Europe, there aren’t even 100 vendors.

What is the difference between BTC (Bitcoin) and BCH (Bitcoin Cash)?

The main difference between them is the block size (BCH has a size of 8 MB, while BTC is limited to 1 MB).