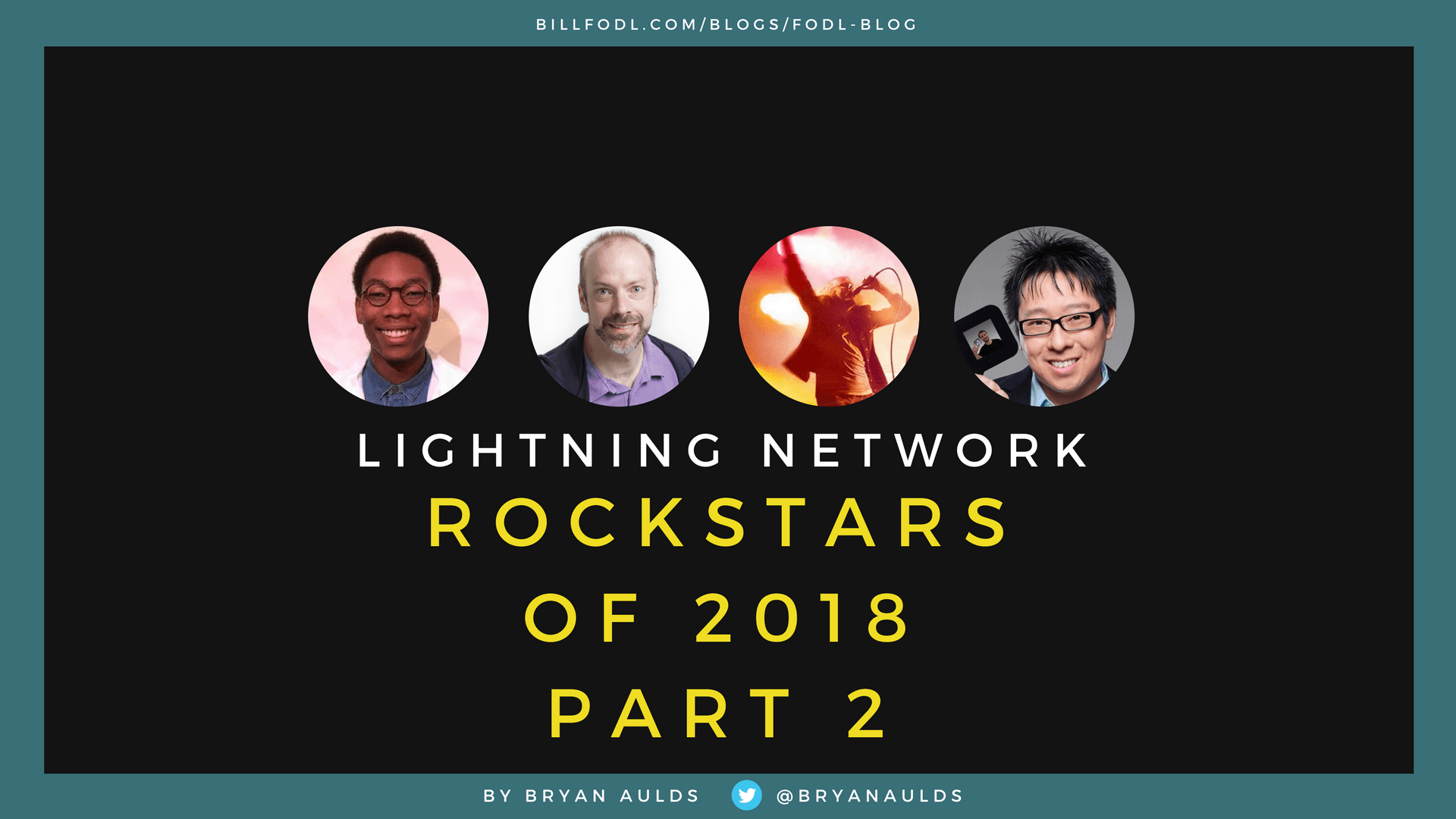 If you want to get a whole bunch of people on twitter riled up, the best way to do it is leave someone off of a list they deserve to be on. Without too much further ado, here’s four more Lightning Rockstars!

Roasbeef has so many commits, his Github commits summary looks like the floor after a Fat Joe music video. Solid. Green.

He is one of the work horses behind Lightning Labs and their ever hip Lightning Network Daemon (LND for short) as well as Neutrino, a push to get lightning onto cell phones, a key to mass adoption of Lightning network. Olaoluwa continues to make it rain code each and every day! Follow what he’s doing @Roasbeef on twitter or, if there’s a bit of prog’er in you, watch him at his work on Github!

What do humble men and women of character do when they see a great task in front of them? They roll up their sleeves, grab their tools, and get to work.

Here’s Russell rollin’ up his sleeves and getting to work

Upon seeing Joseph Poon and Thaddeus Dryja’s paper and understanding (long before most people) it’s implications, Rusty did just that. Before the fanfare and videos of lightning powered Juke Boxes playing Hodl Gang, there were late nights in front of a keyboard and 5 AM conference calls. You can be sure that Rusty was there. However, if you want to hear someone bragging about their own contributions and accomplishments, you won’t hear it from @rusty_twit on Twitter or @rusty_lightning on medium. That’s just fine, we’re happy to brag for him!

Thanks for all your hard work Rusty!

Way back in 2013, before bitcoin was cool, Nadav founded Bitrated, a (still FREE!) service that helps buyers and sellers easily form 2-of-3 multi-signature wallets for escrow. Both agree on an arbitrator, who will serve as the 2nd signature in the case of a dispute. Most men would have sat back and drank Pina Coladas on a beach somewhere after that. It’s a good thing for us Nadav is not most men!

Instead, Nadav was working hard as the prime driver behind Blocksteam’s latest “Week of LApps” or Lightning powered Apps. You can see his handiwork in the ever cool Lightning Juke Box and the File Bazaar, a way to easily unlock a file if a after micropayment is made for it. Now there’s a way to play OMC’s “How Bizarre” on repeat using Lightning at your local bar! Thanks Nadav, this Bud’s for you!

Though not a dev, Samson Mow (aka Excellion of the Magical Crypto Friends) is the cheif strategic officer of Blockstream and CEO of Pixelmatic, a game development studio - this is a man who wears many hats. As you probably already know, Blockstream has been one of the other large firms besides lightning labs to help bring lightning to the world, and Samson has been very influential in educating the masses to see Lightning’s merits.

Lately, Samson can be found all over the world giving talks about lightning and all the work Blockstream is doing to make it mainstream. In our last post, we mentioned Blockstream’s ‘Week of LApps’. More recently, he collided with Roger Ver in a debate over the future of Bitcoin, to much controversy from both sides of the scaling debate. We look forward to seeing more of what Samson and his team at Blockstream will bring the community in the coming months and years.

That does it for round two of Lightning Network Rockstars. Let us know any others we may have missed who deserve to be on the list!