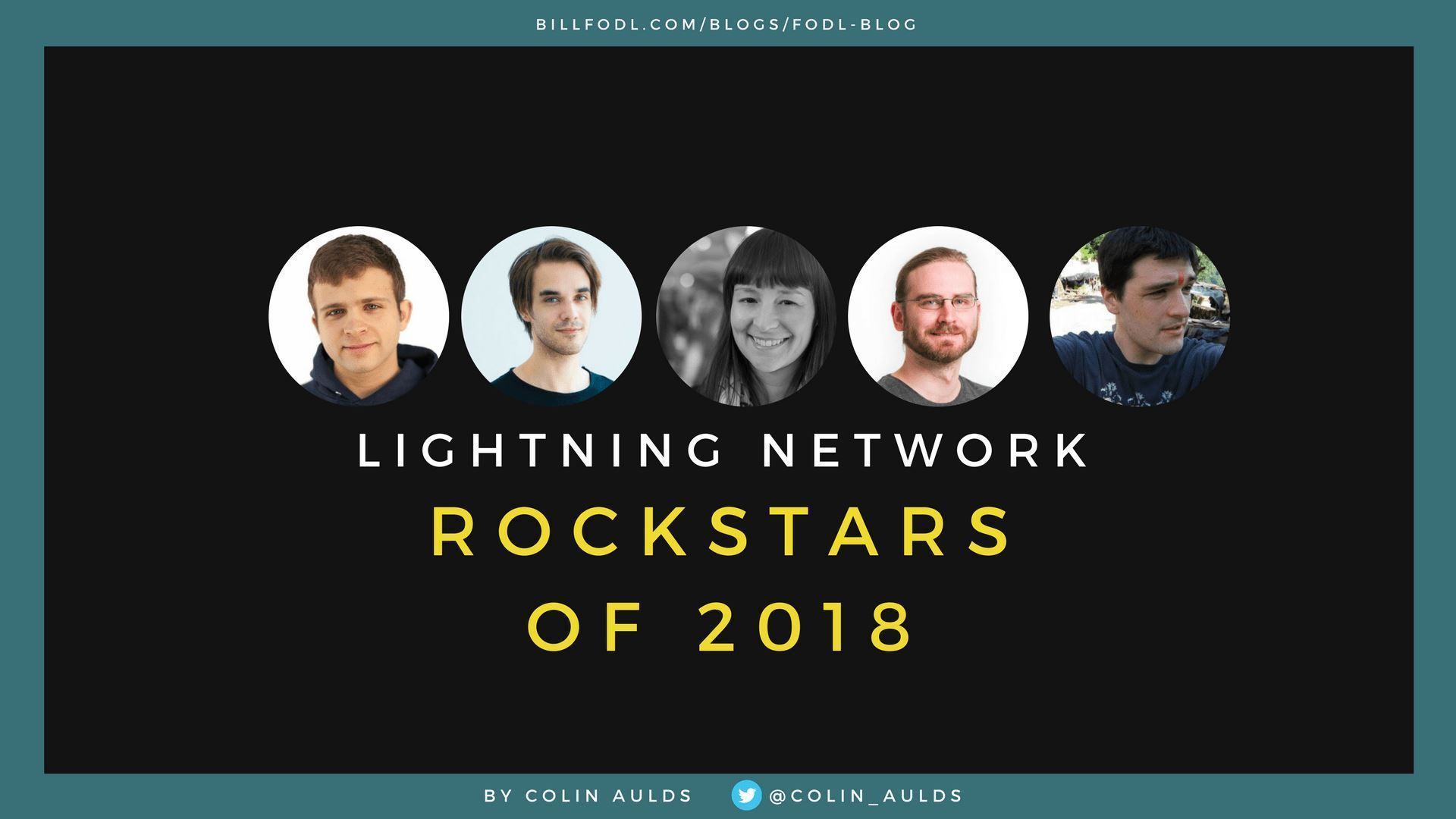 The Lightning Network is slowly but surely gaining steam and making good on its promises to scale bitcoin and litecoin by providing near instant transactions at the cost of fractions of pennies. Everyday, it seems there is a brand new revelation about just how wonderful this tech is turning out to be.

Given all the development surrounding this technology, it’s tough to know who you should you keep your eye on in 2018. Never fear; Billfodl is here! We have compiled a list of Lightning Network rock-stars for 2018. Remember this is a open source projects sport, and there’s no way we could mention everyone - that said, these are the projects and devs that caught our eye!

Jack Mallers (aka Jimmy Mow) is the boy-genius behind Zap, an open-source lightning wallet aimed at improving the user experience of the lightning network by mimicking the functionality and look of a traditional ‘on-chain’ wallet.

In Jack’s own words from his announcement of the app on medium, “We…hope this is a step in the right direction — allowing anybody to experience the Lightning Network through an intuitive and familiar interface at the click of a button.”

But the app isn’t just familiar. Quite frankly, it’s beautiful, which is something I really cant say for most traditional bitcoin wallets I’ve used.

Look at how pretty!

The wallet features a black, white, and gold color pallet and minimalist symbols that aren’t just easy to understand but also pleasing to look at. The whole experience is polished in and out, and this is a feature that the more technical user will not appreciate as much, but is extremely important when attracting the many non-technical users that will be necessary to incentivize mass adoption. We are rooting for you, Jack!

Nicolas Dorier is a coding machine. In addition to being a .net dev and the founder of NBitcoin, what really excites us about Nicolas’s work is his project called BTCPay Server. Why are we excited about this project? Well, it finally allows e-commerce stores like ours to cut the chord with centralized crypto payments processors like bitpay, gocoin, and coinbase and instead. Instead of handing over our keys to centralized exchanges and payments processors like the ones above, we can become our own self-hosted payment crypto payments processor and receive all payments into our own hardware wallet. In addition, it supports Segwit, which makes accepting payments even cheaper, especially when mixed with the fact there is no third party to slice a piece of our pie.

What does this have to do with lightning, you might ask? Well, BTCPay Server also supports lightning payments, which means using Nicolas’s implementation not only gets you an easy e-commerce payment platform for On-Chain crypto payments, but lightning support as well, which should make adoption a breeze for online stores like Billfodl.

BTCPay Server even supports applications on woocommerce, with shopify support coming soon (hopefully!). BTCPay Server brings the economy one step closer to full independence from burdensome (and often untrustworthy) third party platforms that don’t have your best interests at heart or are too leviathan to be able to.

What list of lightning rock stars would be complete without mentioning Lightning Labs founder and CEO Elizabeth Stark, Lightning’s very own Iron Woman. She and her team were the among the first to take a stab at Joseph Poon and Thaddeus Dryja’s white paper that first proposed lightning as a second layer.

Since then, Lightning Labs has released their own lightning implementation - the lightning network daemon - focusing on dev-friendliness, as well as an open source Neutrino platform focusing on security and privacy for light clients to conduct on-chain as well as lightning transactions.

If you haven’t heard of Christian Decker, that’s probably because he doesn’t walk around bragging about everything he and his team have accomplished over at Blockstream where Christian is the core engineer. I first became aware of Christian during Blockstream’s ‘Week of LApps’, wherein for one week, Blockstream released a new application for the lightning network everyday.

Among these apps were:

As you can see, there is a major emphasis on micropayments, which has been a dream of bitcoiners for years, if only the right scaling solution could make it possible. Sometimes dreams do come true.

You can see the full rundown of the Week of LApps.

When talking about a firm as innovative and imposing as Blockstream, it’s easy to miss the trees for the forest and and forget there are real people behind these innovations, sitting at computers and slugging away redbulls just to make your life more awesome and change the world of payments right before your very eyes. Christian and his time are these very people, so you should follow Christian@Snykeon twitter and check out his website.

I was first introduced to Alex Bosworth by our friend E over at The Lite Podcast (and by ‘introduced’ I mean ‘found out who Alex is’).

Alex is the creator of HTLC.me, a fast and easy custodial lightning wallet. Alex himself admits the wallet is “not too secure”, but that isn’t the important part. The important part is he has made it very easy for anyone to immediately get access to a working and simple to use lightning wallet (no need to host a node yourself) which _then_allows you to head on over to his other creation Yalls.org and test out micropayments in the form of a content creation site funded by such payments.

The beauty of these two creations in tandem is that it makes it very easy for people will limited exposure to handling cryptocurrency and no exposure to lightning payments to test out a lightning transaction without all of the massive headache of getting their own node up and running. It’s a taste of things to come, and sometimes that’s exactly what you need to get new users in the door.

Don’t bother…there is nothing in this wallet except excitement

I’d add that Alex is a very interesting guy to listen to on the subject of lighting, as he is very good at condensing difficult technical subjects down into easily-understandable concepts, which is why you should follow Alex@AlexBosworthon twitter and check out yall’s website and HTLC.

I’d say we are in pretty good hands! Are you as excited about 2018 as we are? let us know in the comments and tell us if you think we left anyone out and why (I’m sure we did, as this space is full of wonderful and innovative thinkers and doers; certainly too many to fit in one list).